Mahoney Contracts have teamed up with the Gangmasters and Labour Abuse Authority (GLAA) to provide information designed to prevent modern slavery and labour exploitation on our building sites.

We provide informative posters both on our sites and at our head office and carry out toolbox talks to raise awareness of workers’ rights on site and on spotting the signs of exploitation. These tools form part of the Construction Protocol, launched by the GLAA in October 2017 with a target of eradicating modern slavery and labour exploitation in the building industry.

We signed up to the protocol last year to agree to work in partnership with the GLAA to protect vulnerable workers, share information, raise awareness within our supply chains, and communicate regularly to maintain momentum.

GLAA Chief Executive Michael Rich states: “With more than 100 companies now signed up to the protocol, the industry is becoming increasingly aware of the problem modern slavery and signatories are fully committed to playing their part in tackling this awful crime. By using these tools on site, workers will be able to understand their rights and know how to get help if they are being exploited. Ultimately we want to work with the industry to create and environment hostile to all forms of labour exploitation”.

Mahoney Contracts fully support the GLAA in raising awareness of the signs of modern slavery in the construction industry. 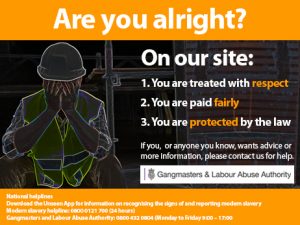 Who We Work With